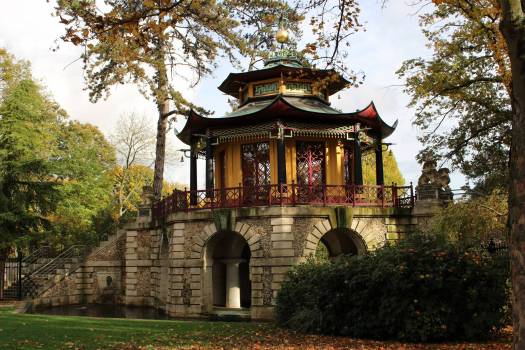 The pavilion is thought to be have been constructed between 1781 and 1785 and was possibly inspired by a voyage to Italy taken by Pierre-Jacques Bergeret de Grandcourt, his father and the artist Fragonard in 1773-1774.  At the time, it was the fashion in France to construct Chinese-style follies in English-style gardens.  Westerners were fascinated by China as it brought them a touch of emotion and splendour in a society that was rigid and conventional.

The octagonal monument has stone foundations onto which is built the wooden pavilion with a copper roof.  The foundations contain a cool room with Doric columns. At the centre of the room is a circular pool used to regulate the level of water.  The Chinese Pavilion was meant to be one of many follies that were to decorate the Bergeret estate however no others were built probably due to the arrival of the French Revolution.

Legend has it that Fragonard drew up the plans for the Chinese Pavilion and participated in its embellishment. For nearly ten years he was a guest at the Bergeret’s château in Cassan, along with his wife and daughter (who died in L’Isle-Adam on 8th October 1788). However the hypothesis seems unlikely as Pierre-Jacques Bergeret had himself notions of architecture. Furthermore around forty plans representing garden renovation projects drawn up by Bergeret still exist, some of which strongly resemble what was actually carried out in the Cassan area.

Due to its stone foundations, which have protected the upper wooden part from damp, the Chinese Pavilion has weathered the centuries and remains standing to this day – unlike many similar constructions.  It was abandoned for many years and suffered damage during the recent wars.  The property developer of the Parc de Cassan handed over the property to the municipality in 1972.  Olivier Choppin of the company Janvry was commissioned to renovate the pavilion.  Aided by a team of passionate craftspeople, the renovation work took four years to complete and gave the pavilion back its splendour.  The inauguration of the renovated pavilion was carried out on 21st June 1975 by Michel Poniatowski, mayor of L’Isle-Adam in the presence of Michel Guy, Secretary of State for Culture.

In 2007-2008 a new phase of restoration was started under the direction of Pierre-André Lablaude, head-architect of historic monuments, involving the upper building and the cold room. A protective fence with CCTV was installed to prevent vandalism and architectural lighting was put in place.  The inauguration took place on 20th September 2008 in the presence of the mayor Axel Poniatowski and the architect Pierre-André Lablaude.

Magnificent railings were installed during the restoration project in 1975 which created a splendid entrance to the gardens of this architectural masterpiece.  Since 1907 the railings had been at the Château de Cassan, on the Route de Beaumont (near the Héros de la Résistance roundabout), which belonged to Jacques Béjot. He had purchase the railings in 1906 which had originally come from the racecourse in the Place de Clichy in Paris which was being demolished.