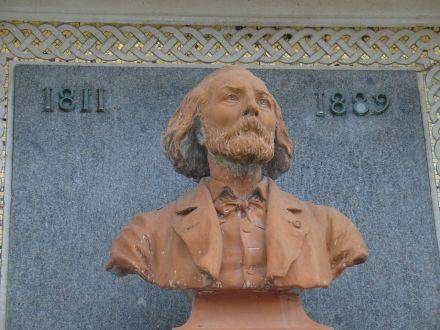 This neo-classical monument was designed by the son-in-law of Jules Dupré, architect Scellier de Gisors.  The bust for the monument, made in Sienna-coloured bronze, was created by the sculptor Laurent-Honoré Marqueste, the marble original is conserved in the Louis Senlecq Art & History Museum.

Located on the corner of Rue Mellet and Place du Pâtis, the monument was inaugurated on Sunday 7th August 1894, five years after Dupré’s death.  His studio had been located just behind the monument but was demolished by his son-in-law in 1900. The original bust in bronze was stolen by the Germans in January 1942 to be melted down.

Jules Dupré was a famous 19th century artist and founder of the Ecole du paysage français modern art school. He was a descendant of an ancient L’Isle-Adam family.  He was born in Nantes on 5th April 1811. In 1815 his father, François Dupré, who already owned two earthenware factories in Creil and Saint-Yrieix-la-Perche (Limoges), opened a porcelain factory in Parmain.  From the age of fifteen, Jules decorated the plates with designs inspired the by flora of the region.

Following a promotion to director of a porcelain factory in Limoges, François Dupré and his family moved regions.  During that time Jules learned from his father all about the techniques of porcelain manufacture and decoration, however he was most attracted to painting scenes from nature.

This was how he came to enrol at the Ecole des Beaux Arts in Paris.  To complete his training he took lessons with Jean-Michel Diéboldt, whose style is a mix of that of David, Géricault and Delacroix.

At the Ecole de Barbizon Jules Dupré made friends with Cabat, Paul Huet, Troyon, Flers and Théodore Rousseau with whom he travelled around France looking for countryside scenes to paint.  At the age of twenty, he was invited to exhibit “au Salon” (an independent art exhibition at the Grand Palais, Paris).  In 1831 he exhibited his works “Une Vue de L’Isle-Adam” and “Une Cour de ferme”.  He met Lord Graves who helped him discover the English countryside. In 1833 his work was inspired by the banks of the River Oise and the valley of Montmorency.  In 1835 the Salon was dedicated to his work. In 1841 he moved to Montsoult with fellow painter Rousseau.  In October 1845, due to limited finances, he rented a studio in L’Isle-Adam opposite the church on the corner of the Grande Rue.  In 1847 he was made Chevalier de la Légion d’honneur which caused him to fall out with his friend Rousseau.  In 1860 he married Stéphanie-Augustine Moreau - daughter of an architect - in Champagne-sur-Oise.

In 1870 Jules Dupré was promoted to officer in the Légion d’honneur.  Two years later, he bought a house in L’Isle-Adam, next to the Place du Pâtis, big enough to receive his friends: Corot, Daubigny, Rousseau, Boulard, Geoffroy-Dechaume and Daumier. He created a large studio in the loft with a stunning view of the River Oise.

The Exposition universelle (Universal exhibition) in 1889 commemorated the work of Jules Dupré.  That same year he was found to have kidney stones and underwent an operation from which he never fully recovered. He died in L’Isle-Adam on 6th October that year and was buried in the town’s cemetery. On 30th June 1890 his studio was sold.

In July 1894 the town of L’Isle-Adam, in collaboration with admirers and friends of the painter, commissioned a commemorative monument in his honour at the corner of Rue Mellet and Place du Pâtis.

Jules Dupré’s house was demolished around 1900.  A street in L’Isle-Adam which leads to the River Oise – an inspiration for so many of his works – was named after him.

The Louis Senlecq Art & History Museum in L’Isle-Adam exhibits several works from this internationally renowned artist.  Numerous museums in France as well as throughout the world, for example the Hermitage Museum in St. Petersburg, also exhibit his paintings.

An exceptional exhibition at the Louis Senlecq Art & History Museum in 2011:

Following the example of the “Cranach” project carried out by the Louvre, the town of L’Isle-Adam launched an enormous campaign to gather donations in order to acquire the work “Environs de Southampton” by Jules Dupré.

The campaign began with much enthusiasm and promised within a few months to raise the 400,000€ required to purchase the work.

It is with the remarkably generous support of the Ministry of Culture, various cultural organisations in the Paris region as well as numerous private donations and contributions from companies like Spie, Eiffage, Thalès, Caisse d’Epargne and Sogeres, that this painting will be exhibited in the Louis Senlecq museum, making its collection of Jules Dupré paintings the third largest in France, after the Louvre and the Beaux-Art in Reims.

The story of this remarkable painting

The oil on canvas painting “Environs de Southampton” from 1835 is considered a masterpiece of the “English” period of the artist Jules Dupré, who following his voyage to England, travelled around France before settling in L’Isle-Adam in 1845.  The painting enthralled fellow artist Delacroix, probably due to the spectacular effect of the sun on the group of horses made nervous by the approaching thunderstorm, reflected by the immense and darkening sky.

The exceptional quality of the painting, its spectacular dimensions (115 x 184cm) and the fact that it has aged so well make it an immensely important work for the Louis Senlecq Art & History Museum.  Until recently, Environs de Southampton had been owned by a private collector and had only once been displayed to the public, during an exhibition to commemorate the artist held at the museum in 2007.