The locks and dams 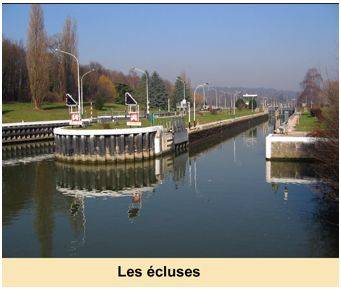 The River Oise takes its source from the Ardennes in Belgium at an altitude of 309 metres in the Bois de Bourlers forest in Forges, south of Chimay (Hainaut). The river’s name comes from the Celtic word Isara which means impetuous, lively and vigorous.  Across the centuries, the name transformed into Esia, then into Oysia (at the beginning of the 9th century) and finally became Oise.  The river crosses the Val d’Oise region for 41 kms before flowing into the River Seine at Conflans-Sainte-Honorine (Conflans-fin-d’Oise)

The locks and dams

As the volume of traffic on the River Oise increased, it was necessary to regulate the flow of the river throughout the year.   The water level differed dramatically depending on the seasons.   At some places there were even fords so people could cross the river.  For this reason, in 1825 Charles X ordered that a dam be constructed.  The work took from 1829 until 1832 and the construction was located south of the Priory Island.  The dam was 110 metres long and comprised 800 wooden stakes tied together - these were later replaced by metal spikes.  On the bank of the river at L’Isle-Adam a lock was built – 46 metres long and 8 metres wide – which allowed one barge (maximum weight 300 tonnes) at a time to navigate the passage.  The river traffic increased however there were long waiting times to pass the lock which local businesses, situated on the tow path, took advantage of.

At the beginning of the20th century, the existing dam and lock became insufficient to cope with the river traffic and the size of the barges.  An improved system was proposed and was declared in the public interest by a law dated 10th December 1886.  From 1901 work began north of the islands.  A portable Derôme dam was installed in 1902, operated by a winch on a footbridge. It enabled control of the river flow.  A Fraycinet lock 38.5 metres long by 5.05 metres wide was later added.  The lock ceased to be used from the 1960’s.

On the L’Isle-Adam riverbank, a new lock was opened to river traffic in 1903.  It measured 125 metres long and 12 metres wide and was 2.5 metres deep.  It could take up to one tug and five barges at any one time and was controlled manually by a system of cogs.   However even this lock was unable to keep up with the increase in river traffic especially when barges became motorised.

Eventually technology evolved and electric motors were used via remote control from a command post.  In 1972, the branch island was cut off in order to construct a second lock (18 metres long, 12 metres wide and 4.2 metres deep) to cope with the envisaged level of European river traffic.

The Derôme dam became dilapidated and was no longer able to manage the level of the river.  In 2006 a new modern dam was constructed which came into service in August 2007.  The old dam was destroyed the following year however the lock which has been attached to it was preserved to let fish pass through. The new automated “valve” dam enabled a more efficient management of the river.  It had giant pistons which were supported on solid piles of concrete in the shape of a sphinx.

In 2003, the lock which was 125 metres long, 12 metres wide and 4.2 metres deep was modernised again and restored.  The work included repairing the concrete which had deteriorated with age, replacing the gates of the lock and the overhaul of the hydraulics and electrical systems.  The lighting was also renewed.  In 2004, the second lock (originally restored in 1972) was again restored.

On 3rd February 2009, the then President Nicolas Sarkozy visited the dam as part of the Seine-Nord regeneration project.

Navigation of the river

Inland-water shipping was an important activity in L’Isle-Adam in the 19th century.  It encompassed many professions that disappeared at the beginning of the 20th century with the arrival of motorised barges, the regulation and dredging of the rivers.  Amongst these professions were:   charretiers de bateaux (cart-drivers specifically for boats), allégeurs (workmen who loaded/ unloaded boats’ cargo) the compagnons de l’Arche (workmen who helped the boats pass under the bridges).

Even today, barges passing through the lock is still an attraction.