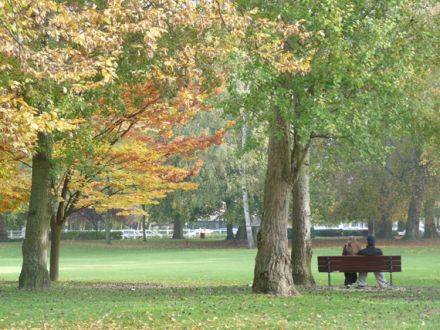 In 1832 Pierre-Charles Dambry, a solicitor in L’Isle-Adam purchased from the “bande noire” (black gang), the land on which had stood the stables of the Conti princes. The stables had been demolished in 1812.  The “gang” was made up of rich individuals from Paris, their fortunes probably acquired through money laundering.  They purchased estates with assignats (banknotes from the French Revolution) then had them demolished and sold the materials and resulting land – the transactions being settled in banknotes of legal tender.

Pierre-Charles Dambry renovated the grounds to resemble an English garden and installed ditches and fences to dissuade intruders. He dug canals into which flowed the excess water from the fountains at the Town Hall and a small lake in the clos Bergeret. He also constructed a small, square, Italian Renaissance-style château:  it was called the Château Saut du Loup, but was also known as Château de La Place du Feu-Saint Jean or Château Dambry.

The château is separated from the River Oise by the place Feu-Saint-Jean.  It has a view of the river, the river-beach, the bridges, the railway and the hillside at Champagne-sur-Oise.   Even though it is situated in the town centre, it is surrounded by a magnificent garden planted with imposing trees and the entrances, situated at the place Feu-Saint-Jean and Avenue des Ecuries de Conti are decorated with ornate gates and railings.

Dambry held the position of mayor, general councillor and Member of Parliament and became the person most credited for the renovation of L’Isle-Adam.  During his mandate several routes were created and bordered with trees, notably the Avenue des Ecuries de Conti in 1837.  Via generous donations, he also contributed to the development of the town for example, the embellishment of the church and the construction of the presbytery and the town hall.

After his death the château was acquired by Paul Dalloz (from the newspaper Le Monde Universel) who extended the property (from 1896 to 1899) by purchasing neighbouring land.

His son-in-law Edmont-Just Desfossés, director of the newspaper Le Monde Illustré and mayor of L’Isle-Adam from 1896 to 1898, inherited the property and extended it once again, particularly towards the boundary with the path Chemin de Cassan.  It’s in this area that the Gué stream continues its journey having flowed through the Thoureau Park.  Desfossés also reorganised the château constructing an additional wing and stylish front steps.

The town of L’Isle-Adam has an exceptional setting nestled between the River Oise and the forest and is full of parks, gardens, leisure areas and walks.

The town proudly ensures the maintenance of its green spaces, using the right methods and products and working with organisations for nature protection to ensure the respect of flora and fauna.

Banks of the River Oise

Garden of the Chinese Pavilion

Gardens of the Château Conti