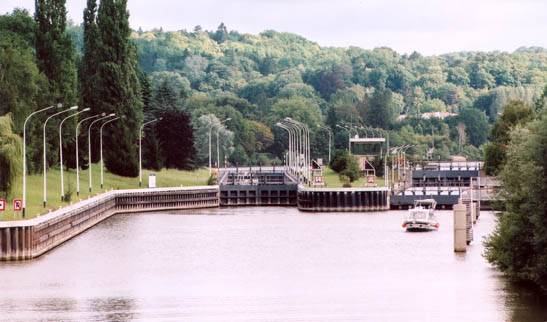 In 1850, Alfred Ducamp - owner of the château on the Priory Island - constructed two bathing cabins and a pontoon on the bank of the River Oise, where children could learn to swim.  The swimming was supervised by a lifeguard who was a member of the Société de Sauvetage et de Natation (Organisation for Swimming & Lifesaving) founded in 1894 by Mr Edmond-Juste Desfossés – journalist and mayor of L’Isle-Adam from 1896 to 1898.

In 1903, in order to cope with the increase in river traffic, a new flood barrier and lock were constructed upriver. Navigation of the Cabouillet branch of the river however was ceased and wooden footbridges were constructed to link the Cohue Island and the right bank of the River Oise.

In 1906, Mr Denise, former mayor of Parmain and local historian, described the beach: “The bathing area in L’Isle-Adam can be considered an authentic river beach. It is located on a branch of the river where navigation is forbidden so there is no river traffic.  The riverbed comprises fine sand and is soft on the feet…..”

In 1910 renovation work was carried out, led by Henri Supplice with the help of Eugène du Pinet – the newly nominated town architect.  They installed a dozen cabins, constructed some technical buildings, renovated the gardens and created flowerbeds. The river beach was enclosed by a perimeter fence. Sadly in 1914 the war destroyed all their hard work.

In 1920, still under the direction of Eugène du Pinet, Henri Supplice constructed a proper bathing area of 3.5 hectares: a one hectare sandy beach with around fifty cabins, a large slide, diving boards, a bar called Le Normandy, flower beds and a music kiosk in which classical music was performed every Sunday and Bank Holiday.

In 1919, in order to promote the river beach, he founded a tourist office for the L’Isle-Adam region. The project was so successful that the town become a tourist destination on 23rd August 1921.  Between the two wars, a special “river beach” train service was set up with a train leaving every weekend from the Gare du Nord (Paris) to L’Isle-Adam.  The journey took a mere 37 minutes!

In the 1930’s, a concrete swimming pool separate from the river was constructed complete with artificial waterfalls.  Thanks to his remarkable sense of organisation, Henri Supplice ensured the river beach at L’Isle-Adam became the biggest in France. In 1936 the town of L’Isle-Adam was classed as a tourist resort.

After the Liberation in 1947, Mr Muller, a wealthy Parisian fur trader, became the owner of the river beach and also President of the tourist office.  In 1948 and 1949, the river beach was completely renovated.  A wading pool for children was added to the main 50 metre pool situated by the river. A foot-bath was also installed. The major addition was the construction of a 25m “competition pool” – the then statutory minimum size required to host national and international competitions.  The original design of the pool included six portholes through which one could watch the divers and swimmers.

On 27th August 1949, Johnny Weissmuller inaugurated the “competition pool”. He was the first swimmer to complete the 100 metres freestyle in less than one minute.  Throughout his career, he won fifty-two US champion titles and established twenty-eight world records.  From 1932 he embarked on a career in film, most famously as Tarzan.  Swimmers of all levels came to compete in L’Isle-Adam. Mady Moreau, champion diver and member of the “L’Isle-Adam River Beach Club”, surprised everyone at the 1952 Olympic Games in Helsinki by winning a silver medal in the diving competition.

On 3rd July 1981, after several years of negotiation, the town acquired the river beach and work began to bring the facilities up to standards of the day.  The renovated L’Isle-Adam river beach was inaugurated on 2nd August 1981 by the mayor, Michel Poniatowski. 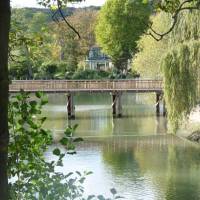 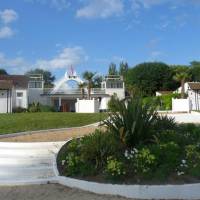 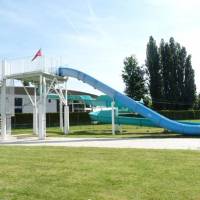 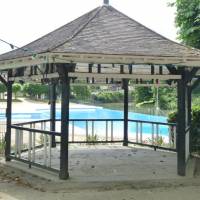 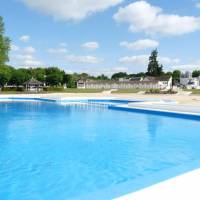 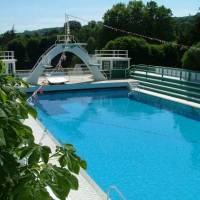 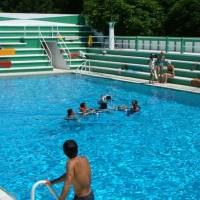 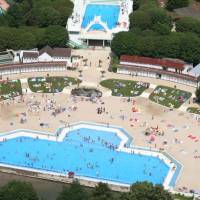