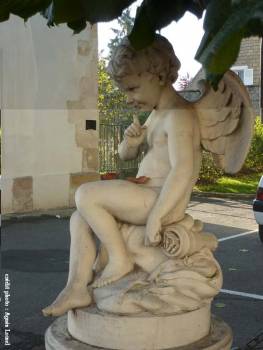 Etienne Maurice Falconet was the son of a carpenter. He became an apprentice in the workshop of Jean Baptiste Lemoyne at the age of nineteen. He was influenced by the Baroque style of artists such as Le Bernin and Puget but later moved towards the neoclassic style, though his sculptures remained expressive (alive, animated, passionate) was well as sober and elegant.

His most famous work is the equestrian statue of Pierre le Grand known as the “Cavalier de bronze” on display in St. Petersburg, Russia.

He attracted the interest of Madame de Pompadour (Jeanne Antoinette Poisson), who commissioned him for a series of small statues that each told a story such as “La France embrassant le buste du Rois” (France embracing the King) from a drawing by Coypel, “La Musique” (The Music) and “La Jardinière” (The Gardener).

He was made a member of the Royal Academy for Painting & Sculpture in 1754 thanks to his work “Milon de Crotone”.

The various sculptures that he created from 1755 to 1757 made him the most renowned sculptor of the era. From 1757 to 1766, he worked as Director of the sculpture workshops at the Royal porcelain factory in Sèvres where he helped make a success of the biscuit de Sèvres – Sèvres sculptures (in round, low relief) often deliberately left en biscuit – without enamel or decoration.

Diderot gave him the task of editing the article “sculpture” within his famous Encyclopédie.

Falconet’s other works include the statue L’Amour Menaçant (Threatening Love) which depicts Cupid asking for silence as he fires an arrow from his quiver.

The work was commissioned by Madame de Pompadour, the sculptor’s patron.  The model in plaster, exhibited in 1755 was probably given as a gift by Voltaire. The model in marble was first displayed in 1757.  Afterwards it was placed in the gardens of the Hôtel d'Evreux, known today as the Elysée Palace, which was the Parisian residence of the Marquise.

In 1994, Michel Poniatowski, senator-mayor of L’Isle-Adam ordered a resin copy of the work from the Louvre in order to place it in the Tillé Square in the Nogent neighbourhood. It was a memorial for the numerous child victims of the allied bombings from July to August 1944.  The statue was inaugurated on 10th August 1994.  Michel Poniatowski referred to the work as “Amour au Silence” (Silent Love).