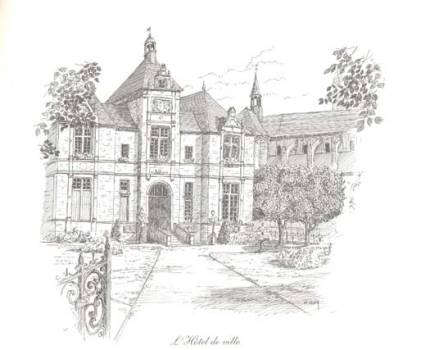 At the time of the Revolution, the first “communal house” (town hall) was located on the Moulin Bridge in the former reception room of the Supreme commander Anne de Montmorency. The house was purchased by a Parisian during the auctions of “national property”, so the town hall was transferred to 20 Rue Saint-Lazare (which later became the offices of the Justice of the Peace)

In 1867, the municipality purchased the land situated between the Grande Rue and the Avenue des Ecuries de Conti which belonged to the Topinard family. They planned to build a new town hall on the land and extend the Rue Saint-Lazare up to the Avenue des Ecuries de Conti.  The mayor Pierre-Charles Dambry personally contributed 5,000 francs to fund the purchase.  The land was part of the Hôtel Bergeret estate.

In 1868 the old washhouse, constructed in 1834 (where the current war memorial stands) was demolished so that the town hall could be built. Part of the Topinard land was used to extend the Rue Saint-Lazare from the Grande Rue up to the Avenue des Ecuries de Conti

The architects Félix Rouguet and Louis-Charles Boileau (pupils of Viollet-le-Duc), who had worked on the renovation of the church, drew up plans for the new communal building and estimated the cost to be 50,000 francs.  Mayor Dambry personally contributed half the sum.  The major work was completed in 1869 just before Dambry died.

The internal work (coffered ceiling in the boardroom, entrance hall, concierge accommodation, library and archives) the purchase of furniture, the garden and the installation of a fence around the square were completed in 1870.  The path to the presbytery was extended across the square at the town hall.  Two gates in the railings allowed pedestrians to pass from the Grande Rue to the Avenue des Ecuries.

The four paintings on the walls of the council meeting room were given as a gift by Edmond-Just-Marie Desfossés, director of the newspaper Le monde illustré and mayor of L’Isle-Adam from 1896 to 1898.   They were painted in 1875 by Edmond Morin and represent the countryside at different seasons (January, June, August and October).

The ceiling of this room consists of 48 painted panels called “coffers” on which are written the twenty-three communes of L’Isle-Adam that existed in 1870.

In 1989, during the restoration of the front steps of the town hall, a small lead box was discovered. It contained a brass plate dated 1870 (date of the construction of the steps). On the plate was engraved “The work was carried out in July this very year by builder Alfred Serebourg advised by the architect Boileau and the constructor Gobet”

The name of Mr Dupont who carried out the latest restoration and the date of the work were added to the plaque, and the mayor, Michel Poniatowski, requested that the plate be placed back on the steps.

On 20th June 1872 at the town council meeting the mayor, Félix Thoureau, suggested that a memorial fountain be constructed (between the Grande Rue and the Avenue des Ecuries de Conti), fed by water from the spring in Nogent, in memory of the former mayor Dambry.  The project was financed by the residents of L’Isle-Adam to pay homage to Dambry who had donated much money from his personal fortune to fund projects to improve the town.  His effigy, sculpted in bronze, adorns the fountain, a creation by the sculptor Chenillion.

In January 1993 the senator-mayor Michel Poniatowski donated a fountain in the form of a shell on a pedestal decorated with a triton (“merman”).  The work was created by sculptor Lorenzi and was attached onto the rear facade of the town hall.

From September 2008 to January 2009 work was carried out to renovate the facades and roof. Two types of lighting were installed:  “architectural” lighting to enhance the character of the building come nightfall and also “festive lighting” using low voltage LED’s for use on special occasions. 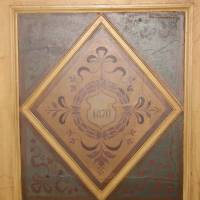 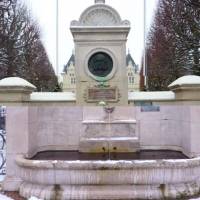 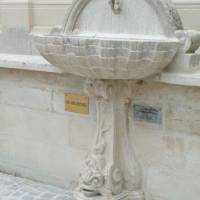