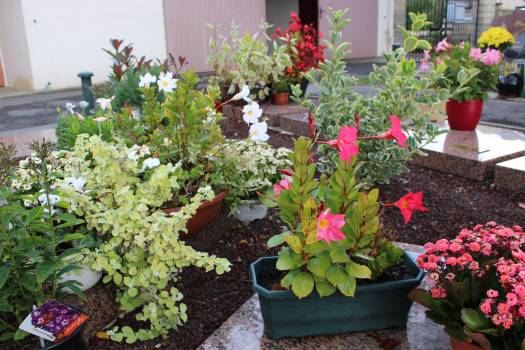 During the Bronze Age two “necropolises” (graveyards) existed: one in Vivray the other near the stream Ru du Bois.  Later a necropolis began to form around the Saint-Martin Church.  The monks of the royal abbey of Saint-Denis came here to bury members of their order.

A cemetery existed around the new Saint-Martin church from the beginning of the 16th century until 1832. The graves were then transferred to the new cemetery (current location Avenue Michel Poniatowski).  During this time more than 8,520 people were buried inside the church – these were essentially members of religious orders but also certain wealthy families.

In 1829 the decision was taken to build a new cemetery.  It was 38 ares (3,800 sq. metres) in size and its construction was financed by donations from Alfred Ducamp (owner of the château on the Priory Island) and Mme Kapeler (owner of the Château of Stors).  It was inaugurated in 1842.

In this cemetery one can visit the tombs of several famous former residents of L’Isle-Adam:

The chapel where Pierre-Charles Dambry was laid to rest. Dambry was a former mayor, Member of Parliament, conseiller général and above all generous benefactor to the town.

The tomb of General Horix de Valdan, -Chief of the Defence Staff, who was tasked with going to Versailles to negotiate the surrender of Paris in 1871

The tomb of Count Louis-Philippe de Villers-la-Faye, former mayor who had received as a guest at his house, Honoré de Balzac (French novelist and playwright)

The tomb of M. Dehaut, pharmacist in Paris, well-known for his pills and potions, former owner of the Domaine des Vanneaux

The pyramidal memorial to Abbot Grimot, priest of L'Isle-Adam (1848 to 1885) and historian. On the memorial is a medallion in marble representing the Abbot himself, created by the sculptor August Robert dated 1878. The medallion was probably commissioned by the Abbott for his tomb that he hoped to have placed inside the church (in the Chapel of the Virgin). For health reasons, however authorisation for the project was denied.

On the headstone is engraved:

The Byzantine-style remembrance chapel of the Kapeler Family. Owner of the Stors Estate 1827 to 1840. Therein lay Mr & Mrs Kapeler and their daughters.

The tomb of Dr Bossion, immortalised in the writing of Honoré de Balzac

The temporary tomb given by Mr. Chantepie and his wife Mancier, to the town.  They founded the hospital-hospice that bears their name