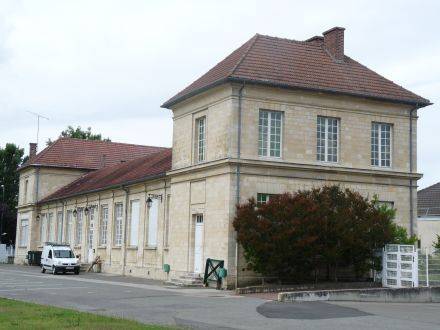 The school was constructed in 1860 in the Rue du Dr Senlecq* and is the oldest school in L’Isle-Adam.

The mayor Pierre-Charles Dambry commissioned the construction of the girls’ school, nicknamed the “château school” due to its slender steeple (no longer in existence) and its elegant appearance.  From 1868 the building housed a “salle d’asile” - equivalent to a fee-paying nursery school - run by nuns.  In 1881 the building was extended to also receive boys and a further wing was added in 1917.  In 1960 the school became known by its present name.

In 1970, during the creation of the Collège d’Enseignement Général (secondary school) the Camus School building needed to be used for older children so the primary school girls were moved to the Balzac School. Once the collège was completed, the primary school children moved back and the school became mixed.  Part of the “château school” was set aside for nursery school children from the Cassan School who were awaiting the construction of their own premises.

In 1989 the Jules Ferry building was renovated and a modern building was added to create a school with 10 classrooms, a library and an activity hall.  The “château school” was abandoned in 1990 however several uses for the building have been found since - the CMPP (medical centre), the council, the associations “Source Vive” and “Le livre en main” (specialists in bookbinding) all use the premises.

Maurice Borgne was born in Persan and worked as a teacher.  He took up his first position in L’Isle-Adam in 1930. He returned to the town in 1949 as head teacher of the boys’ primary school.  In 1950 he introduced “supplementary lessons” for children from the age of eleven - what was later to become the first secondary school in L’Isle-Adam.

In 1952 he launched another new idea - mixed classes for sixteen and seventeen year-olds.  He was elected town councillor in 1964 and retired in 1967.  A small road in L’Isle-Adam which links Rue Chantepie-Mancier to the Le Nôtre walkway, via the college, is named after him.

In 1851 the street was called Clos Gravier then it became Rue de l’Asile. In 1882 it was renamed Rue des écoles and finally became Rue du Dr Senlecq.

This street led to l’asile (the sanctuary), known today as the Château Camus, which had been constructed in 1868 on the site of a small farm called Folie Bergeret belonging to the Bergeret family.  The sanctuary was a fee paying nursery run by nuns.