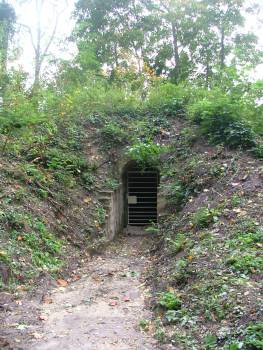 The “fief” (estate) of Châteaupré situated near the Nogent neighbourhood of L’Isle-Adam passed into the hands of Philippe de Cassan when he married.  Philippe de Cassan was a Piedmontese gentleman who took French nationality in 1583.  In 1708 François III de Cassan married Reine-Geneviève Bergeret.

In 1778 Pierre Jacques Bergeret de Grancourt (1742-1807), financial treasurer, became the owner of the estate.  He also purchased eighteen extra plots of land and launched an immense construction project including the creation of a lake with several islands each with their own “follies”.

The new château was constructed on the main island and was surrounded by a meandering artificial river, regulated by spillways hidden under the Pavillon Chinois.  Beyond the Ruelle aux vaches, in the Forest of Cassan an ice house was constructed.

A tablet belonging to Zimri-Lin, King of Mari in Mesopotamia (1775-1761 BC), tells of the construction of an ice house in Terqa.  In the 4th century BC, ice brought down from the mountains during winter was stocked in these underground caverns, ready to be used in the hotter months.

In the West, the existence of ancient and medieval ice houses has not been formally substantiated.  Their construction spanned across the 18thand also during the Age of Enlightenment. Every estate was thought to have possessed at least one in order to keep provisions cool during the summer months.  Château owners were thus able to serve sorbets to their guests – a dessert introduced to France by Queen Catherine de’ Medici (1519-1589).

The location of an ice house was carefully chosen. The land needed to be dry but near a lake- often created for the purpose. The layers of ice extracted between December and February were carefully compacted right up to the door, the packed snow was able to make up for the the absence of heavy frost.  A thick layer of straw was placed on top.

During the Second World War, the German troops set up an assembly area for V1 missiles, a munitions store, and a fuel depot in the Forest of Cassan.  Bullets recently found deep in the former ice house are evidence of their occupation.  There are also bomb craters in the surrounding area dating back to allied bombings from July and August 1944.