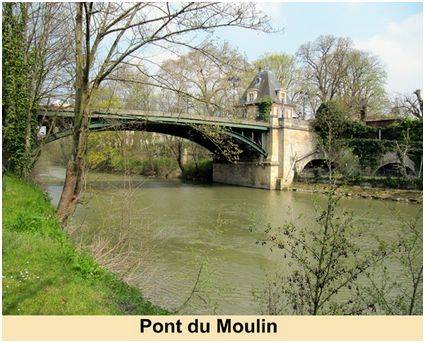 This bridge links the Priory Island with the town of Parmain.  It still retains the “memory” of the windmill that used to stand on the former wooden bridge and whose blades turned in sync with the river during ancient times.

The local lord Anne de Montmorency ordered the reconstruction of the bridge in stone around 1550. The bridge had five arches and was 42m long and 10m wide.  A new windmill, a courtroom and a prison were also constructed, all in a Renaissance style.  The foundations of the windmill were partly on the riverbank and partly on the pillars of the bridge driven into the riverbed.  Its doors and windows were ornately decorated.  The prison and courtroom were the same size as the windmill and had a steeple.  Very few people were detained in the prison – only a few poachers!

Due to war damage, flooding and lack of maintenance, the bridge had to be restored in 1663.  The three “cutwaters” needed to be completely replaced from their base on the riverbed up to the arches.  On 14th July 1663 following a decision from the Council of State, François Le Vau, engineer and architect for King Louis XIV, was given the task of repairing the bridges in L’Isle-Adam.  The work was finally completed in 1666.

In 1832, the State bought the buildings located on the bridge (the windmill, the courtroom and the prison) and had them demolished in 1844 in order to widen the bridge and give more room for the water in the river to flow underneath. In 1860, the central arch and the one towards the town of Parmain were reconstructed and enlarged by a metre.

In 1903, during the construction of the new floodgate, the stone Moulin Bridge was demolished and replaced by a single-arch metal bridge to facilitate navigation of the River Oise at that point.  On 3rd September 1914, French troops bombed the bridge.  Provisional footbridges were constructed on 30th November of the same year and construction of a new bridge was completed on 1st May 1915. On 10th June 1940 the bridge was once again destroyed by French troops. It was reconstructed in 1943, however was bombed by the Germans before their retreat on Wednesday 30th August 1944 around 3.10pm (day of the liberation of the town).  The bridge was reconstructed for the last time in 1948 and measured 26m long and 12.50 m wide.

On 14th November 1989, after nine months of renovation work, the new Moulin Bridge was inaugurated by the senator-mayor Michel Poniatowski and Jean-Philippe Lachenaud, vice-President of the Conseil Général. The width of the bridge was increased from six to nine metres following the replacement of two metal arches on the abutments.