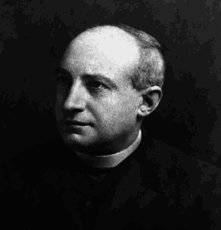 Henri Breuil was born in Mortain, Normandy in 1877 however during his early childhood he moved to Clermont in the Oise region where his father was Crown Prosecutor.

Breuil studied at the Saint-Vincent College in Senlis under the Maristes brothers.

After passing his baccalaureate, he entered into the seminary of Issy-les-Moulineax where he met the masters with whom he spent much time discussing the issues of the Creation, Evolution and the human race.

He developed an intellectual relationship with his science professor Abbot J. Bouyssenie, a passionate geologist, who introduced Breuil to the methods of classification and gave him books with which he familiarised himself with the concepts of ancient history.

In 1904, Henri Breuil passed a degree in natural history. In 1910 he was ordained as a priest at Saint-Sulpice but his superiors recognised his gifts and taste for scientific study and gave him the freedom to pursue them. The Bishop of Soissons released him from all parish activities. For Breuil this was the beginning of a great adventure. He went on countless explorations earning him the nickname of “globetrotter”.  He searched for any proof of ancient history throughout the world which would add another link to the chain of lost civilisations.  He even admitted spending eight years of his life underground exploring various caves.  In 1911 he was given the position of Professor of Prehistoric Ethnology at the Institute of Human Palaeontology.  From 1927 to 1928 he taught at the Sorbonne and was finally made Professor at the Collège de France from 1929 to 1947.

In 1938 he was elected a member of the Institute and in 1947 shortly after his retirement from the Collège de France, he bought a house in l’Isle-Adam where he rested between expeditions.  He already held many titles however in 1958 he was made Commandeur de la Légion d’Honneur

Through his written correspondence we can see how the memory of his house in L’Isle-Adam was important to him.  Whether he was in the Cape of Africa, in China or in Iceland, he collected seeds or uprooted bushes that he would later plant in his garden and try to grow.  He had an area in his garden called “his forest” where he kept his collection of exotic plants, species unknown to most other gardeners, however he didn’t neglect the simpler plants and spent much time pruning his roses and fruit trees. His passion for nature never left him.

On 14th August 1961 Abbot Henri Breuil passed away in L’Isle-Adam at the age of eighty-four.  It was with his characteristic discretion that he left this world, without ceremony or speeches. He joined his ancestors in a small cemetery in Belleu near Soissons.  He had dedicated sixty years of his life to researching information that would enable us to understand the origins of the human race. He left behind his considerable life’s work that had been translated into several languages.  In his monumental work “Quatre cents siècles d’art pariétal” (Four hundred years of parietal art) which was published in 1952 he shows the potential of his findings.

In 1970 a commemorative plaque was placed on the wall of his former house at 8 rue Dr Senlecq in L’Isle-Adam, however the town had already honoured the memory of the “Father of Ancient History” in 1967 by naming a road after him.

In 2006 the exhibition Sur les chemins de la Préhistoire, l’abbé Breuil du Périgord à l’Afrique du Sud (Abbot Breuil: on the trail of prehistory from Perigord to South Africa) was recognised as being of national interest by the Ministry of Culture and Communication. The exhibition was held at the Louis Senlecq Art & History Museum.